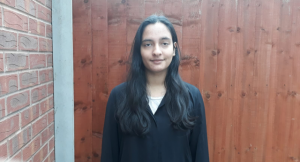 Having grown up in Erdington in Birmingham and attending North Birmingham Academy since she was in Year 7, Nidhi Juneja has now been offered a place at the University of Cambridge and is the first person in her immediate family to be going to university.

We caught up with Nidhi to find out more about her, what she will be studying and any advice she’d give to E-ACT pupils wanting to apply to Oxbridge.

Congratulations on your offer at Cambridge! Tell us a bit about what you’ll be studying and why you chose to apply to Cambridge.

I’ll be studying Biological Natural Sciences and I chose Cambridge as I liked the course structure and the teaching style. There will be supervisions and the chance to discuss my subject of interest with an expert in the field. Science and technology are rapidly evolving, so I want to be part of that revolution and scientific community. I also like the fact that as my professors’ research progresses within the community, it means that I will be being taught the most up to date content.

When did you start thinking about applying to Cambridge? Was there anyone in particular that encouraged you?

Throughout the years I always thought there was a possibility that I could be accepted into Cambridge. At North Birmingham Academy we’ve always been taught to aim higher and teachers have challenged me to show what I’m capable of.

In Year 9, I attended a trip to Oxford University and that opened my eyes to what is achievable and made me realise that I could in fact go to one of the top universities. I decided to pick Cambridge as it has a high reputation and is a leader in research.

Were there any teachers at North Birmingham Academy in particular that helped or pushed you to apply to Cambridge?

My subject teachers have all been a great help. Miss Brown has been amazing, as she guided me through the application process. Miss Long also organised a meeting with past Cambridge students, so that I could gain an insight into the interview process.

What advice would you give E-ACT pupils who might be thinking about applying to Oxbridge?

Even though you come from a state school, that shouldn’t stop your drive to pursue a place at a top university. I would advise anyone thinking about applying to just go for it as it’s a once in a lifetime opportunity.

What are your career aspirations after university?

I’m not entirely sure on which career I’d like to pursue, but I know that the skills I will gain at university will help me in the future and I’ll be able to apply my knowledge to really make a difference.

What will you miss most about being a student at North Birmingham Academy?

I will really miss the community feel at North Birmingham Academy and the atmosphere is fantastic, which is why I chose to study my A-levels here rather than go to sixth form. The teachers are also amazing and they’re always around to help.

Being a student at North Birmingham Academy has allowed me to thrive and provided me with good opportunities. My academy introduced me to the Nuffield Future Researchers programme, and also informed me about the Social Mobility Foundation, which helped with the university admissions process.

We wish Nidhi the best of luck with her new adventure at Cambridge University later this year and look forward to hearing about her progress, especially within the scientific field. Find out more about North Birmingham Academy here: https://northbirminghamacademy.e-act.org.uk

The post From Erdington to Cambridge – meet our latest student to get into Cambridge appeared first on E-ACT.

We hope everyone is feeling rested and ready for the home stretch as we head towards summer. Reminder that Monday is a teacher INSET day, so we will have to wait an extra day to welcome back our students once again. See you on Tuesday #NBAFamily https://t.co/Ds1cqYXCvB