We use cookies on this site to improve your user experience

With NBA being situated a stone’s throw from the massive regeneration of the local Perry Barr area, we were contacted by Tarmac to see if we could brighten up the construction site hoardings.  The idea was to involve and connect with the local community by asking us to share our artwork with the community. 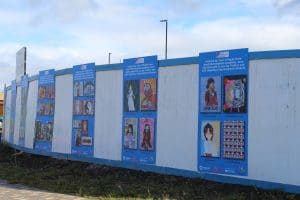 Four pupils, who are now in our Sixth form, were able to travel to the site to attend the big unveiling.  Spanning 7 large display boards, their beautiful art work has been enlarged and placed on the site hoardings for all of the local community, commuters and visitors to admire and enjoy on their travels.

After a short speech by the site director, the pupils were congratulated and given a certificate and small gift in recognition of their accomplishments.

“It was a pleasure and an honour having you and the girls on site, you have no idea how appreciative the site is for that artwork. It’s like added “something” to the morale of the team, and I hope that positive vibe will spread to the community, I believe in the power of art especially when done by young artists.”

Well done to all of the published artists involved, a great achievement for you all!

Year 11 Saturday School is cancelled for this week. Have a restful weekend as we head into the last two weeks before Christmas